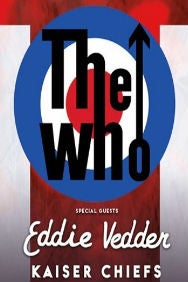 Singer Roger Daltrey and guitarist and songwriter Pete Townshend have announced that they will be unleashing the combustible force that is The Who, with symphonic accompaniment this summer at London’s Wembley Stadium on Saturday 6th July 2019 with special guests Eddie Vedder and the Kaiser Chiefs.

The Who will also be releasing their first album of new songs in thirteen years later this year. On stage, the line-up will be rounded out by familiar Who players featuring guitarist/backup singer Simon Townshend, keyboardist Loren Gold, bassist Jon Button and drummer Zak Starkey.

Commenting on what WHO fans can expect on the 2019 MOVING ON! tour, Pete Townshend stated: "The Who are touring again in 2019. Roger christened this tour Moving On! I love it. It is what both of us want to do. Move on, with new music, classic Who music, all performed in new and exciting ways. Taking risks, nothing to lose. Looking forward to seeing you all. Are you ready?"

On the tour, Roger Daltrey said "Be aware Who fans! Just because it's The Who with an orchestra, in no way will it compromise the way Pete and I deliver our music. This will be full throttle Who with horns and bells on."