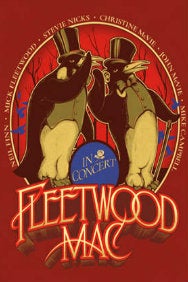 No under 2&#39;s are permitted into the Stadium.&nbsp; No under 14&#39;s permitted in the Gold Circle Standing or Pitch Standing areas. All under 16&#39;s must be accompanied by an adult 18+ at all times.&nbsp;

One of rock’s most enduring, beloved and successful bands of all time. The success of 1977's Rumours album established them as a legendary phenomenon with one of the biggest-selling albums ever made. Containing hit singles such as Go Your Own Way, Dreams and Don't Stop, Rumours has sold more than 40 million copies worldwide to date.

While never managing to repeat that level of success, their 1987 album Tango In The Night remains their 2nd most successful album, selling a highly respectable 15 million copies, an amount many other bands would never achieve. While they have not released a new album since 2003's Say You Will, they 'don't stop' wowing crowds with their live shows.

Please note there is a maximum of 4 tickets per card holder.